I came across this image of a statue that’s apparently known as ‘The ‘sullen’ kore’ (maiden). Even women made of stone can’t escape being told they should smile… 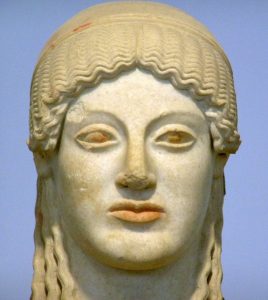 Since this piece is currently in the Acropolis Museum, I’ve dug out my ancient souvenir guide from a visit in 1986, to see if she was in there. She is indeed pictured, and she’s listed as the ‘The kore of Euthydikos’ from the dedication on the base of what was then presented as the feet of the same statue. Now, I have no idea if some later analysis has decided those feet don’t actually belong to the rest of this piece, prompting a name change. It’s not as if I’ll be travelling to Athens any time soon to be able to check. 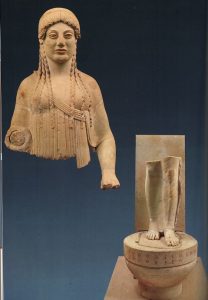 Either way, the statue’s current name does come weighted with a lot of assumptions and implications. It’s definitely a reminder of just how much history is in the eye of the beholder.

Why am I looking at statues from the Acropolis? Come to that, why has it been so long since I last posted in this blog? Well, there’ll be more news coming to to explain all that very soon…