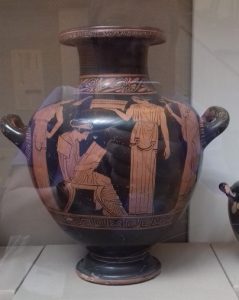 Securing Justice for Athena was as much a challenge for me as a writer, as it was for Philocles trying to find out what had happened. This is a distinctly different murder to the first two deaths he’s investigated. In both those cases, he was directly involved, so everyone could accept he had a legitimate interest in tracking down the guilty party. This time though, he’s never even spoken to the man who’s been found dead, and that matters.

Investigating a suspicious death in ancient Greece was a family’s responsibility. It was up to a male relative, most likely the head of the household, to uncover the truth. It was his choice whether or not to bring a murder case before the city’s judges. The Athenians certainly took homicide seriously. The myths that underpin Aeschylus’ great trilogy of plays, The Oresteia, tell how the Areopagus Court was established, when Orestes was called to answer for killing his mother and her lover, as he was pursued by the vengeful Furies. Once an intent to prosecute had been declared with a public notice displayed in the agora, the designated magistrate reviewed the evidence presented by both sides, to establish there was indeed a case to answer. There were legal safeguards against malicious prosecution and false accusations were heavily penalised. But doing any of this, up to and including getting witnesses willing to testify to court for the one-day trial, was still a family duty, not a civic responsibility.

In Justice for Athena, the great and good of Athens might want this particular mess cleared up and quickly, but Philocles needs an excuse to get involved. He may be working for the Furies, as far as he’s personally concerned, but these goddesses of vengeance don’t hand him some divine warrant card to impress everyone else with his authority. He has no way to compel anyone to talk to him if they don’t want to. He’ll need to persuade people to share what they know.

The further I got into this story, the more I realised how few other expectations Philocles could rely on, when it came to solving this crime. These days, witnesses and other people on the periphery of a murder expect to be asked where they were at the time of death, to provide an alibi, and to make a statement. Philocles won’t find anything like such unquestioning cooperation. Today, the general public will be wary of the penalties for intruding on a crime scene or somehow obstructing a police investigation, but there were no police in Athens. There were the Scythians, the public slaves, but their role was limited to maintaining public order. Philocles can call on them to stand guard over a corpse, but they can’t start knocking on doors and asking questions. Free Athenian citizens won’t accept such intrusion into their private affairs by foreigners and slaves. No one, not Philocles or anyone else, has the authority to enter an Athenian citizen’s home without an invitation. There are no subpoenas, search warrants or interviews under caution.

Even when Philocles can find allies to help him, their resources are limited. Organising a citywide man hunt is going to be a challenge if the quickest communications technology is a slave running through the streets with a message. How does he go about issuing any kind of all-points bulletin or coordinating surveillance without tipping off a suspect?

These and other as aspects of life in 5th century Athens made writing this story a most enjoyable challenge. I’m happy to say early readers are finding the book just as rewarding.

2 thoughts on “How do you write a murder mystery without the usual expectations of an investigation?”